camera and Riaan said: "Yes." Now what he told him on camera I don't know, but Boris was then very happy, kept on and I said: "Listen, what my. hearsay evidence I've told you. I've introduced you to the guy who told me the story. Leave me alone now." He's a very persisting arrogant guy. I eventually had to lock my front gates and change my phone number because I unplugged my phone for a weekend. If I plug it in Sunday night: five minutes, Boris Ersson. I don't know how. He must have...and he just goes on: "Hello, this is Boris speaking" as if nothing had happened. So I eventually locked my front gates and I said: "If you can get over that gate..." I was a man that was...several attempts on my life. "Try it and I'll show you something. They'll carry you in a box back to Sweden. You don't want to listen. I told you my story. I introduced you to Riaan. Don't come and tell me

you." Because apparently to him, he then spoke togave his full cooperation, that's what Boris Ersson said. He then went back to Poun Sweden and then he spoke to ſ. He was also on TV last night. AB16609, acting for Gene de Kock, that's Riaan's lawyer. He's just

opposite, he's in the Southern Life building just in the next street. In the same block. You will get him. And spoke to and said they would pay all costs if Riaan comes over and I don't know what else. And then eventually started phoning me again in the middle of the night, saying: "If Riaan is not going to come they're going to do this." I says: "Why do you tell it to me? I've no need of it." And it's then that I changed my phone number and said: "Listen, I've had enough of you." Now what Riaan is saying today I don't know. That I can't tell you. But what happened now with the Swedish journalists: I got them to speak to, who was the main anti-propaganda. If you had negative propagandas against the South African police and against the South African government,was then in section D, he's a colonel in the police. He was the expert in countering negative propaganda towards the South African...he'll tell it to you. He had fifty journalists on his list...on his...of the police list payers...if a student organisation to the left was started on a campus, would start it off to the right. So what I did I introduced him to the Swedes and so and says: "This is what you can expect from this iman. Listen to his story." Then he listened to his story. Then I would bring him, Peter Casselton and myself, who would sit there one side and then come in and start asking questions. Now with Wolfgang Afterbladet and his cameraman one night,was sitting there and I said: "Vicky, why don't you stop talking nonsense to the world? Why don't you stand up for the truth? The lies are over. Those times for lies are over." And11 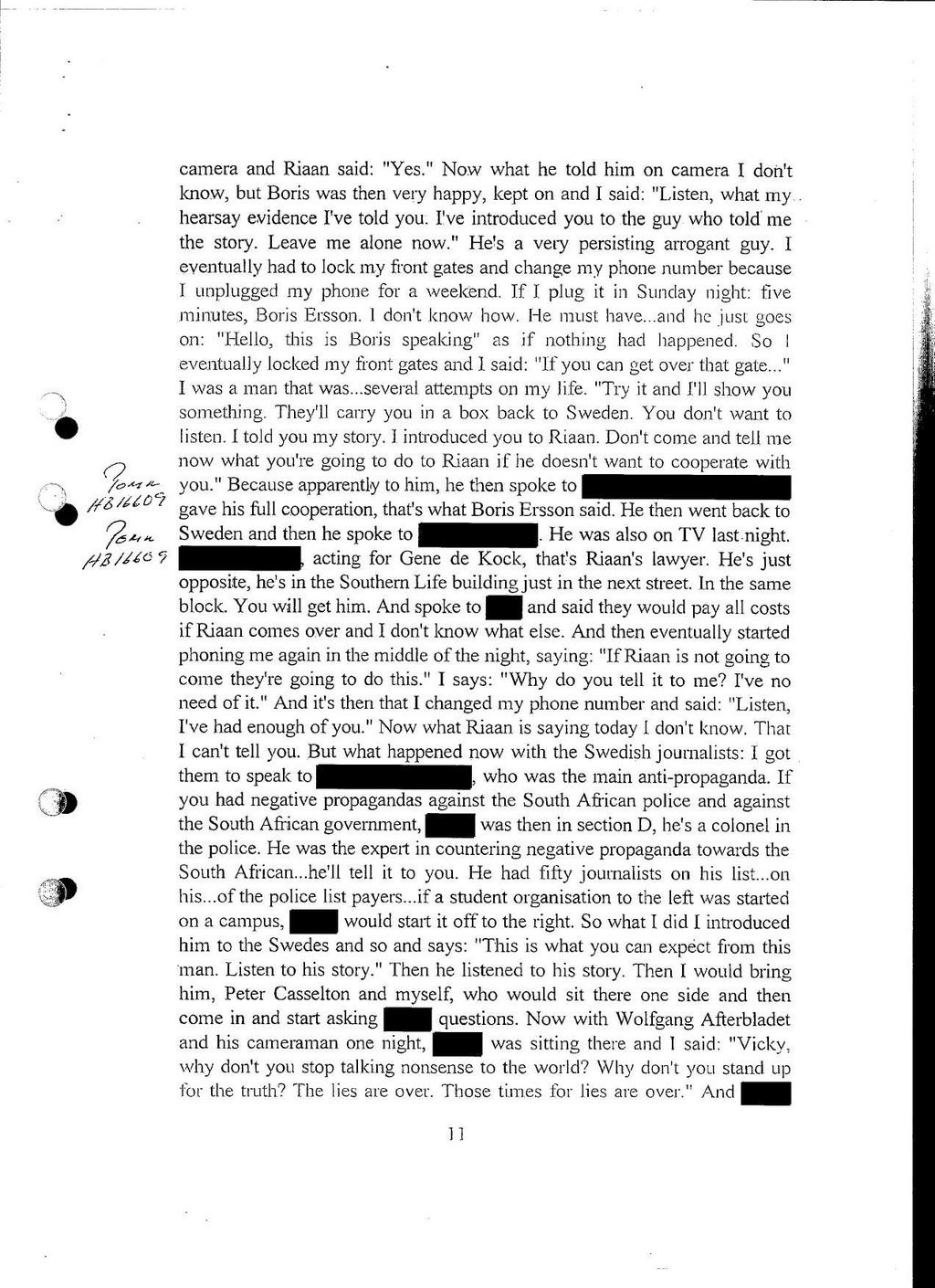